Thank you to Rachel at Rachel’s Random Resources for giving me the chance to review A A Abbott’s latest offering, Lies at her Door 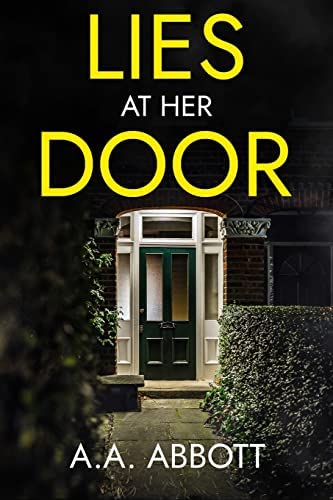 She forgot about her childhood friend… until his body is found under her garden. Can she prove she didn’t commit the decades-old murder?

Lucy Freeman struggles to find satisfaction in life. Trapped in the shadow of her rock star brother, the thirty-two-year-old craves more than her days at home caring for her terminally ill mother. But her routine takes a turn for the horrifying when a giant sinkhole collapses the earth outside their house and reveals a skeleton.

Shocked to discover the bones belong to a former member of her sibling’s band, Lucy’s worst nightmare comes alive when police suspect her of the killing. And as she turns to her dying parent’s diaries in a desperate search for vindication, she’s entangled in a dark and complicated truth.

I have been a huge fan of AA Abbott since the release of The Trail Series so I was super excited when I saw this standalone pop up.

What an absolutely stunning yet gripping read that kept me guessing throughout. I couldn’t put it down. I don’t want to give too much away but the characters and storyline were superb. This was yet another fantastic psychological thriller from Abbott.